Number of Films that Lewis Seiler Made with Humphrey Bogart: 5

Well, it was a bit tough to find much information on Lewis Seiler, which surprises me just a little considering that he directed at least 88 films over his career and was a contract worker for Warner Brothers.

A few things did come to light, though. Seiler seemed to treat his job as a director as just that – a job. He worked slow. He rarely read scripts before showing up for the day. He had to be reminded that he should precede the cast to the set each day.

So John Huston he was not.

What he was was a “house director” for many Warner Brothers films when Bogart was beginning his career. They had a script. They had a cast. Call the next name on the director’s list and he’d show up. Starting in comedy shorts, then moving on to Tom Mix Westerns, Seiler would eventually direct the much-acclaimed war film, The Guadalcanal Diaries for Fox.

All that being said, I think there are a lot of underrated gems in his filmography, especially a few in his Bogart collaborations. Seiler was known as the man who could get a gritty gangster film done efficiently, but as I’ll point out in just a bit, his experience in comedies led to one of my favorite Bogart guilty pleasures.

So, without further ado, let’s welcome Lewis Seiler into The Usual Suspects!

A remake of 1933’s The Mayor of Hell, Bogart is now in the role of the prison reformer that James Cagney played in the original. Crime School is also incredibly similar to another film by stars Bogart, Billy Halop, Gale Page, and Director Seiler that would come out a year later – You Can’t Get Away With Murder, as once again Halop would play a good kid who’s made some bad choices and just needs the right mentoring. Page would even go on to play the exact same character of an exasperated older sister in the later film.

So as you’ve probably already guessed, there’s nothing new or groundbreaking going on in Crime School. That’s not to say that it’s terrible – it’s not. The performances are all decent, the direction is straight forward, and the plot is the “kid friendly” version of what we saw between Bogart and Pat O’Brien in San Quentin. All that being said, it’s probably not a must-see unless you’re a big Bogart fan, or you really like the “Dead End Kids”

Tepid Bogart at best, but not the worst in his filmography. You can check out my original post on the film here. 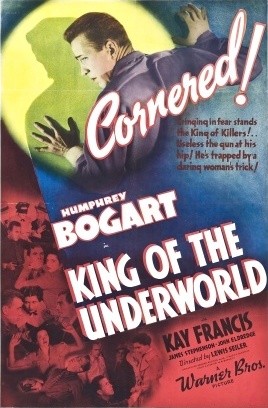 The key word to this film is potential. There’s a lot of potential to be had here, but unfortunately, King of the Underworld falls short of living up to it. It seems as if Director Seiler can’t decide whether he’s making a crime drama, a gangster comedy, or a love story. King of the Underworld feels like a mashup between the taut dramatics of Bogart’s gangster-on-the-run film, The Petrified Forest, and the goofy shenanigans of Seiler’s own gangster-in-hiding film, It All Came True.

Despite all of my issues with the tone and script of this film, it’s not unwatchable. The acting is well done, Seiler knows how to frame a shot and keep a story moving, and the plot has a few interesting turns.

I think that the fault for any shortcomings might lie both with Director Seiler’s inability to pick a mood, and the fact that the screenplay was written in part by another multi-time Bogart collaborator, Vincent Sherman. Sherman, as many regular Bogie Film Blog readers know, directed two of Bogart’s more offbeat films – The Return of Doctor X and All Through the Night – both films that I contend were meant as spoofs of the horror and gangster genres respectively.

So was King of the Underworld meant more as a parody? I don’t think so. So much real angst was built into the story between Bogart and his Kay Francis that I think the comedic moments were just a bit too overplayed. There’s just enough humor thrown in that it undercuts Bogart’s threat as an antagonist. My guess is that Sherman and Seiler were both still in the infancy of their experimentation with turning the gangster genre on its head, and they put in a little too much silliness to make any of the gravitas truly effective.

Regardless, this one might be a fun double feature with Seiler’s own It All Came True, or Vincent Sherman’s underrated gem, All Through the Night.

Problems with this one aside (see the aforementioned Crime School), there are numerous good scenes of comedy, action, and drama which all help elevate the film above a sub par script. The second joint effort between Bogart, Seiler, and Billy Halop, Warner Bros certainly seemed to be trying to mold “Dead End Kid” Halop into a new leading man.

The melodrama can skew a little heavy as Halop wrestles with his secrets while in prison.  There are multiple crying-into-the-elbow moments, and a few “You ain’t the bossa me!” teenage rebellion outbursts. While Halop occasionally appears a little green, and his sibling tension with Gale Page often seems unmotivated, there are some flashes of good work in his performance.

The biggest problem, I felt, was that Director Seiler was a scene or two short in setting up the seemingly unbreakable bond between stars Humphrey Bogart and Billy Halop. Money and power lured them together, but after ending up in the jail, what kept Halop loyal?

Again, not the worst film in Bogart’s filmography, but you could do better. You can read my original post on the film here.

Now we come to my favorite film between Bogart and Seiler! This is exactly the kind of movie that I was looking for when I started this blog – a thoroughly entertaining Bogart film that I’d never seen or read anything about.

On top of that, I had one of those Ah-ha! moments with an actor.  My whole life I’ve heard people rant and rave about Ann Sheridan, but for some reason she’s never clicked with me. I always figured that I’d just never seen the right movie, and now I have. What a spitfire. From her first machine gun conversation with the B&B folks, to her final song, she was amazing.

While It All Came True isn’t rated well on IMDB or Rotten Tomatoes, it’s got a great cast, capable directing, and wonderful timing. There were lots of moments that reminded me of the all-time great screwball comedies like Arsenic and Old Lace and Bringing up Baby – movies that were able to balance wonderful gags with just enough pathos to keep me hooked on the characters. Seiler’s early comedy chops get to shine here at their brightest.

So what am I missing with all the bad reviews?!?  Feel free to tell me why I’m wrong!

The fifth, and last film from Director Seiler and Bogart’s collaborations, this one showed such a devotion to detail for the Film Noir genre (in most parts) that it’s hard to imagine this is the same director who helmed the four previous Bogart collaborations.

Other than a brief chair tipping scene, gone is almost any element of silly gangster antics à la King of the Underworld and It All Came True. And other than a few minutes in a cabin hideaway between Bogart and Irene Manning, gone are any of the melodramatic trappings of teenage rebellion or love-angst as we saw in Crime School and You Can’t Get Away with Murder.

With its dark atmosphere, low camera angles, nightmarish voice montages, anti-hero protagonists, ultra-violent shootouts, and car chases, this film is almost a straight-up Film Noir thriller. The only time Seiler seemingly errs away from Noir is the aforementioned scene where Bogart goes on the lam to a mountain hideout with his dame. Then, for a few minutes, we get some lighthearted romantic comedy, but only just the smallest of doses. Does it detract from the overall film? Maybe a bit, but I could also see someone arguing that the moment of levity helps round out Bogart and Manning’s characters while giving us a chance to catch our breath before the big finale.

So why is The Big Shot not more widely known? I’m not sure. It’s not a perfect picture by any means, but it certainly seems like a more important film for Bogart’s Noir filmography than it’s given credit for. There is a character that appears in blackface for a short section of the second act, but he’s already been established as a not-so-nice guy, and Classic Film fans can be pretty forgiving when it comes to racial tension from a different era, so I would imagine that’s not the reason – although it probably doesn’t help.

Regardless, if you get a chance to catch this one on TCM, take it. Guaranteed to stir up some good conversation on what it means to be an “innocent” criminal, Seiler is able to explore some deeper territory here than what I’m used to seeing in his previous films. While it might have a few stumbling blocks that keep it from being a true classic, it’s more than watchable, and it’s a fun Noir film that’s not afraid to get its hands a little bloody.