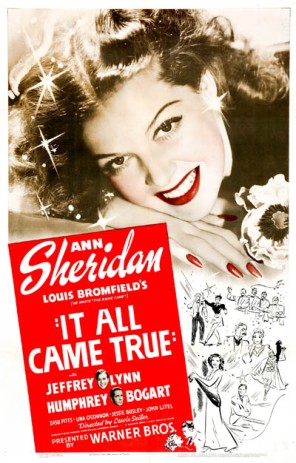 A gangster on the run (Humphrey Bogart) hides out in a boarding house run by the mother of his nightclub’s piano player (Jeffrey Lynn).

This is exactly the kind of movie that I was looking for when I started this journey – a thoroughly entertaining Bogart film that I’d never seen or read anything about.

On top of that, I had one of those Ah-ha! moments with an actor.  My whole life I’ve heard people rant and rave about Ann Sheridan, but for some reason she’s never clicked with me.  I always figured that I’d just never seen the right movie, and now I have.  What a spitfire.  From her first entrance to her final song, she was amazing.  It makes me want to round up all of her movies that I haven’t seen yet and have a marathon.

I worry that this may be one of those entries that I get a few negative responses over – perhaps even the one the gets my film blogging license revoked.  It All Came True isn’t rated spectacularly on IMDB or Rotten Tomatoes, but I feel like I’ve found a new movie for my top twenty.  Great cast.  Great direction.  Great timing.  I can’t say enough.

There were lots of moments that reminded of the all-time great screwball comedies like Arsenic and Old Lace and Bringing up Baby – movies that were able to balance wonderful gags with just enough pathos to keep me hooked on the characters.  What am I missing here?  Why is this movie not on more great comedy lists?!?  Feel free to write me the riot act in the comments below and tell me how wrong I am, but I loved this one.

Was this the first time that Bogart truly spoofed his iconic gangster image?  I know he’d done some comedies before It All Came True, but Chips Maguire has got to be his first time playing a mobster with such an affable, slapstick edge.  Watching him stumble around his bedroom, gasping and gaping at all the stuffed birds and monkeys, is almost enough to make you forget that he’s blackmailing poor old Tommy (Jeffrey Lynn).

Add in his relationship with the motherly boarding house proprietors, Una O’ Connor and Jessie Busley, and Chips Maguire becomes downright lovable as he begrudgingly accepts their tender loving care while he “recuperates” in bed.

Bogart was very, very good at comedy, and I think this film is a perfect showcase for it.  Surrounded by a wonderful cast, you get a great taste of Bogart’s dry wit as he enthusiastically dances, sings, and mugs his way through this film.  (That’s right, you get to see him do a little jig, sing a chorus of “Strolling Through the Park One Day,” and take target practice at a stuffed monkey.)

Not even a year later, we get to see him play a very similar character, “Gloves” Donahue, in the comedy gangster thriller All Through the Night, but I’m pretty sure this movie was his first step towards turning some of his more notable personas on their ear.

After making my way through two of Bogie’s recent bios, I’m a little shocked that this movie didn’t come up.  It seems like he’s really enjoying himself in the role.

Ann Sheridan = perfection here.  Her portrayal of Sarah Jane Ryan goes toe to toe with Bogart’s dastardly gangster, and she does her best to steal every scene.  I’ve already added her to the list of actor filmographies that need to be explored much more deeply.

Jeffry Lynn is great as Tommy, the nightclub piano man who comes home to his mother and old sweetheart.  He reminds me a little bit of a young Hoagy Carmichael from To Have and Have Not, and for once, I’m not unhappy that Bogart didn’t end up with the girl.  Lynn does very well in the role.

Una O’Connor and Jessie Busley, as the curmudgeonly Mrs. Ryan and the flighty Mrs. Taylor respectively, play off each other, and their boarding house guests, with just the right amount of silliness without derailing the show.

Felix Bressart as the failed magician, The Great Baldini, also has a number of scene stealing moments as he repeatedly tries to save his act from his “stooge” of a poodle who is constantly trying to trump his best tricks.

And Zasu Pitts as the basket case boarder, Miss Flint, garners her fair share of laughs as she spends the movie crying wolf over all the men who supposedly stalk her, until she finally has her nightmares fulfilled in Chips Maguire.

There are quite a few great Bogart moments in this film.

It’s hard not to see Duke Mantee when Bogart’s lying in bed, pulling the trigger on an unloaded gun as he aims towards a particularly freakish stuffed monkey that haunts him from the wall.

We also get treated to some classic gangster dialogue as Bogart says lines like, “Don’t worry ‘bout me, baby!  I got myself covered both ways from the middle!”  and, “To think I might get in trouble for pluggin’ a rat like that!”

But my favorite moment, by far, comes when nutty Miss Flint begins drinking to calm her nerves.  Sarah Jane, afraid that Miss Flint will squeal to the cops, tells her that gangsters like to strangle squealers, seal them in a cemented barrel, and throw them in the river.  Playing off Flint’s fears, Bogart stands just behind her as she’s guzzling champagne, saying offside to an imaginary cohort, “Ya got the barrel and the cement ready? Get plenty of wire!”  It’s enough to send the poor woman over the edge and out the door into the hands of the police where we get another hilarious drunken scene.

This film is too good to be ignored.  I’m going to have to watch it again in a couple of months to see if I’m off my rocker.  I thought it was one of the best Bogart comedies I’ve ever seen.