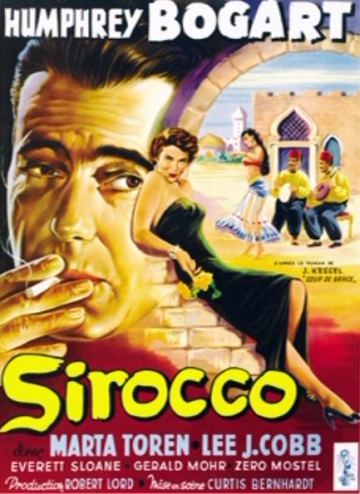 —Not as Casablanca-ish as You’ve Been Told—

A black market gun dealer (Bogart) sells weapons and ammo to the Syrians as they revolt against their French occupiers in 1925, only to fall in love with the girlfriend (Märta Torén) of the French Colonel (Lee J. Cobb) in charge of French Intelligence.

The bar on this one had been set pretty low by everything that I’d read and everyone that I’d talked to before I watched it. I was told over and over again – this was a weak attempt at recreating the magic of Casablanca.

I got Sirocco as one of the five films from the TCM box set ‘Humphrey Bogart: The Columbia Pictures Collection.’ During the film’s introduction, Ben Mankiewicz acknowledges the criticism that the film has received for aping Casablanca, but he also points out that watching the film removed from the era helps the enjoyment of it quite a bit. I would agree 100%.

Yes, we have expatriate Bogart involved in some criminal operations in a foreign occupied country. And yeah, there is a woman involved, who also happens to be involved with a man who’s doing his best to become a martyr for his cause. But I think Sirocco does a good job of finding its own legs as it diverts away from many of the more iconic qualities that we think about when we consider Casablanca.

First and foremost, Harry Smith is a much darker criminal than Rick Blaine. Whereas Blaine ran an under-the-radar casino that was actually favored by the local law, Smith is supplying the weapons that are aiding the Syrians to actually kill the French in charge. If discovered, Smith knows he would almost certainly be shot.

Blaine lives low profile, rarely leaving the nightclub and never sticking his neck out when there’s trouble. Smith, on the other hand, is required to live in a constant state of danger as he dodges bullets, stalks darkened alleys and underground catacombs, and risks his neck every time he goes after a paycheck.

But above all, one character describes Smith as a man with, “no morals and no political convictions.” While the same accusation was essentially made against Blaine, I think much of it was an act that he was ready to drop in a heartbeat when finally faced with a life and death decision that could impact the entire war. With Smith, it’s dead on.

Beyond that, I think it could be pretty easily argued that Sirocco isn’t even a Bogart vehicle nearly as much as it is a showcase for Lee J. Cobb as he plays the French military man in charge of smoking out Bogart’s gun ring. I think we’re supposed to be rooting against the French as we cheer on Bogart. But Bogart’s portrayal is just seedy enough, and Cobb’s is just righteous enough, that it’s not hard to sympathize with the French occupier who defies his own commanding officer to bring a truce to the bloody battle.

We watch Cobb slowly melt down under the pressure of finding the gunrunners while at the same time trying to salvage his relationship with Märta Torén, who is clearly ready to end the relationship and move on to a darker and more mysterious Bogart.

After you watch the film and see what both Cobb and Bogart go through during the last act of the film, try and imagine the role of Harry Smith played by someone less legendary than Bogart. I’m pretty sure that if an unknown had been cast in the role, Sirocco would be considered Cobb’s film to make or break.

This is the second film I’ve written up by Director Curtis Bernhardt, the first being Conflict, and what I’ve really come to appreciate is the way that he often lets scenes play out not for plot advancement, but for character color. Especially check out the scenes where Bogart’s lounging in the barbershop or the nightclub when we get to watch him just exist for a few moments in the environments with his costars, as if nothing more important was happening in the rest of the world.

He’s very good here. The script doesn’t give him quite as much nuance as Rick Blaine, but I enjoyed seeing him play a real anti-hero. If Bogart had made the decision to leave the girl behind, or shoot his way out of being arrested, it would have been believable. Director Bernhardt does of great job of setting up Harry Smith as a man who is just in it all for the money. Once he’s got enough, he’ll probably disappear, moving on to the next conflict where he can make a quick buck at the expense of a lot of dead soldiers.

I like dark Bogie a lot. This character is probably more on par with someone like Roy Earle – a likable criminal who you almost want to root for, even though he’s a part of some pretty awful behavior. Check out the scene where he takes the cigarette back from Torén and smokes it despite the fresh blood that’s on the end of it.

Lee J. Cobb plays French Intelligence officer Colonel Feroud. Cobb does a really nice job here of painting a man that’s incredibly noble, and yet incredibly flawed at the same time. He’s the only man in Damascus who seems to want the fighting to end without any more bloodshed, but at the same time, he loses his temper and attacks the woman he loves. I want to watch it again just to spend a little more time focusing on his performance rather than Bogart’s.

Everett Sloane does wonderfully as the over-taxed, and sometimes iron willed, French officer Gen LaSalle, and it’s his pressure on Cobb’s subordinate officer that gives the final act its true stakes.

Märta Torén plays Cobb’s girlfriend, Violette. Again, like so many of the other characters in this film, Violette is not an easy person to love, and we never fully know if she’s actually interested in Bogart, or if she just wants to use him for an exit from the country. It’s a completely contrary role to Ingrid Bergman’s Ilsa, and Torén holds her own very well against Bogart and Cobb.

Nick Dennis nearly steals the film as Bogart’s sidekick and gunrunning partner, Nasir. I really enjoyed Dennis here, and I want to see a lot more of him. I defy you to pick any scene that he’s in and not smile at least once.

Zero Mostel plays one of the other black marketeers that’s in league with Bogart and Dennis. It’s not a huge role, but I was surprised to see him again in another Bogart film after The Enforcer. I’ve always enjoyed Mostel a great deal, and he’s a perfect fit for this nervous nelly role.

So . . . your favorite nightclub just got blown up with you inside? The room is filled with smoke, blood, and the screams of women? Might as well have a smoke and a drink, right? Check out Bogart and Nick Dennis keeping it cool here:

This one’s well worth a watch. Some of the posters even use the tagline, “Beyond Casablanca,” and I think it could make a great double feature with the cinema classic.