-A Little Too Light on the Comedy-

A frustrated car executive (Adolph Menjou) meets up with a unemployed secretary (Priscilla Lane) in the park and they pretend to be married so that they can get hired on as a cook and a butler for a big time gangster (Bogart).

This one’s an easy listen, but there’s not much meat on the bone, even for Classic Radio fans. While I’ve never seen the original film starring Jean Arthur, its positive reviews would lead me to believe that something was lost in the translation to radio. At a mere 30 minutes, the plot is pretty bare and any thought of character development seems to have been tossed out the window.

Is it worth a listen? Maybe if you’ve got a long drive or flight and you’re a big fan of Priscilla Lane.

Playing a foodie gangster, Bogart’s portrayal of Dan Nolin is not much more than a stock racketeer role that he could play in his sleep. While he gives it his all, the script doesn’t give him enough to make the role more than an amusing extended cameo. It’s mentioned at the end that he was out promoting The Maltese Falcon.

The Rest of the Cast

Priscilla Lane plays Joan, the unemployed secretary that pretends to be married so that she can get a job as Bogart’s cook. As I said before, there’s very little here for the cast to work with. While Lane probably has the meatiest role in the whole production, her motivations for wanting to work for a gangster and for falling in love don’t really get time to add up. That said, Lane is talented enough to make the most out of this small part and it’s not hard to see why the men in the production would find her so cute.

Adolph Menjou plays the frustrated car executive James. Perhaps the film version spends a little more time explaining Jim’s motivations for disappearing from his job (nobody seems to notice) and leaving his fiancee for days leading up to their nuptials (again, apparently unnoticed) when it merely seems like he’s having a bad day. He falls in love. Why? His fiancee is supposed to come off as a real shrew, you know, because she called him at work once.

Roger Pryor hosts the show and plays Bogart’s gangster sidekick, Flash. Normally this type of role would be comic relief, but in a light comedy where the main gangster is already playing for comic relief, Pryor doesn’t have much to do but say lines that could have been given to Bogart.

Not a complete waste of time, but probably only entertaining for die hard Priscilla Lane or Bogart fans.

For my full synopsis of the plot to The Petrified Forest click here.

This one was just another amazing jewel to be found as an extra on the “Humphrey Bogart: The Essential Collection” box set. While the play/film was adapted for radio three times, this is the only one starring Bogart as Duke Mantee, and the 24-film box set is the only place that I’ve found to hear it.

The audio is a little muffled, but it’s certainly listenable. My initial gut reaction was something along the lines of, “Where the heck is Bogart?!?” as he doesn’t show up until the very end of Act I, and even after that, his part seems to be considerably shortened from the film version. Yes, it’s a radio adaption, meaning it was shortened by at least 1/3 or more for the broadcast, but still – where’s the Bogart love?

Then I looked back at the date of the airing – January 7, 1940. High Sierra was still a year away, and up until that point, Bogart had mostly been playing a second fiddle gangster to the likes of Edward G. Robinson and James Cagney, or helming his own crime pics at a much lower B-level.

It’s Tyrone Power and Joan Bennett that get the real time to shine here, and both of them do fine. I’m a little surprised by how much I bought into their romance after being more than a little partial to the pairing of Leslie Howard and Bette Davis from the film. But the chemistry is real here, sharp and energetic, and Power’s drifting writer feels a little more willing to help Bennett’s pouty waitress out of love, rather than pity, as Howard was towards Davis in the original.

Of course, just like the film, the real fireworks start when Bogart comes in. I’ll save my thoughts on his performance until I get to ‘The Bogart Factor’ below, but I will say that the combination of Power/Bennett/Bogart fell a little flat for me.

Overall, it’s interesting to hear Bogart reprise his famous gangster role for the second out of what would be three performances (the original film, this radio broadcast, and then the made-for-TV remake with Bacall fifteen years later), and while it’s not a must listen for casual fans, most Old Time Radio and Bogart enthusiasts will find enough here to make it worthwhile.

Straight to the point – reprising the gangster-on-the-run role of Duke Mantee, Bogart’s third billed and only gets his most famous lines to use. We also don’t get any of the amazing caged tiger-like mannerisms that helped add an incredible amount of tension to the film. I’d also offer that he doesn’t seem quite as enthused for this broadcast as he did in several of his other films that were adapted for the radio. I haven’t decided yet if it’s really his fault, or if the role of Duke Mantee just needs to be seen as much as it needs to be heard. Plus – he doesn’t even get called out for the trivia game at the end with Power and Bennett even though he was the only original cast member from the film!

The Rest of the Cast

Tyrone Power comes off the best out of the entire cast as he takes over for Leslie Howard playing the wandering and depressed writer, Alan Squier. Power has a great voice for radio and the presence to pull off a solid character. Again, like Bogart, the part of Alan Squier has been cut down quite a bit, but there’s still plenty left to work with as Power carries the bulk of the weight in this production.

Joan Bennett is just fine in as the lonely cafe waitress, Gabby Maple, but Bette Davis has cast a long shadow and it’s not easy to get out from underneath of it. Bennett doesn’t give a bad performance, but it’s just low key enough that I wouldn’t have had any idea it was her if she hadn’t been listed in the credits.

Only for Bogart and Old Time Radio enthusiasts, but since it’s a rare find, those are probably the only folks who are going to listen to it. 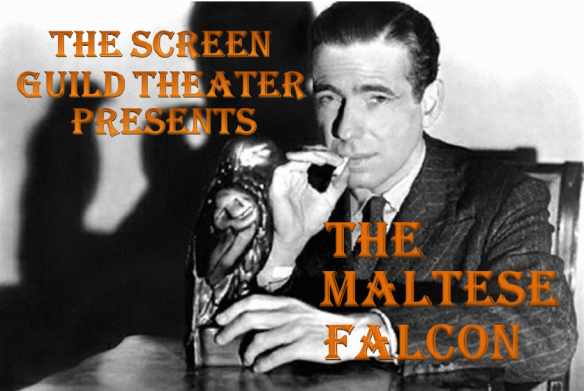 —A Poor Adaption Leads to a Decent Climax—

out of 5 radio Bogies!

For my Maltese Falcon synopsis, you can read my original write up on the film here. And if you really want to try and follow the plot in this heavily condensed radio version of the story, you’d better watch the film first, or you’ll be lost!

I was really looking forward to listening to this broadcast after writing up the 1946 Academy Award Theater Presents: The Maltese Falcon last week. I mean, this version had to be better, right? It’s adds Peter Lorre into the mix, reprising his role as Joel Cairo! While the still unknown radio player that portrayed Cairo in last week’s version was good, no one can stand alongside of Lorre and look good, right?

This broadcast was a bit of a mess. Lorre was not only hardly used, but his best scene from the film, the one where they first meet and Lorre wants to search Bogart’s office, isn’t even in the broadcast! It’s completely cut out and only briefly referenced when Sam Spade tells Brigid O’Shaughnessy that he knows Cairo. Ugh. Lorre was right there! That would have been some easy magic to recreate!

The other big change from the show that I reviewed last week is that this version of the script uses a radio announcer to narrate the story rather than Sam Spade himself. This means that there’s much less Bogart. For some reason, it also means that any action from first ¾ of the story is summed up in the narration rather than heard, as the broadcast steamrolls past any actual plot to get us to the very well written final scene between Spade, O’Shaughnessy, Kaspar Gutman, and Joel Cairo. If you can make it through the first 20 minutes of bland dialogue, that final scene is worth a listen, but if I were you, I’d skip right to it.

In an interesting twist on the 1941 film, one of the four main characters ends up dead at the end of this version. Even considering that interesting changeup, the script still holds true to its lackluster form and we don’t actually get to ‘witness’ it happen . . .

To be honest, I actually enjoyed this version of Bogart’s performance better. He seems to have slipped into character a little bit more and he doesn’t sound like he’s reading his lines quite as much as he does in the later 1946 version. Unfortunately, there’s just not enough script coherence or decent direction for me to recommend this show fully. This one’s just for Bogart completists.

Mary Astor reprises her role from the film as the femme fatale, Brigid O’Shaughnessy. Unlike the 1946 radio version, Astor seems much less interested in performing here and if I hadn’t been told that it was Astor, I probably wouldn’t have noticed. She’s not bad, but compared to the film and the 1946 radio broadcast, she just seems flat.

Sydney Greenstreet reprises the role of Kaspar Gutman, the “fat man” who’s chasing the bird around the world. Even in the last scene where it seems that the reins are finally taken off of the actors, his performance seems caged compared to the 1946 version. The laugh is there, but little else. It’s not his fault though, the script just offers him nothing to work with.

In the biggest disappointment of all, Peter Lorre reprises his role as Joel Cairo, one of the criminals chasing after the bird, only to be relegated to the sidelines for the entire show. Although, saying that he’s “relegated to the sidelines” would be a generous metaphor to use, and I might better say that he’s more of a third string waterboy in the storyline as his part is miniscule and it doesn’t even sound like they let him stand near the microphone!

He does his best, but all of the bite that Sam Spade has in the film is taken away when so much of his dialogue is spent recapping action instead of showing it. That being said, Bogart really does light up when he gets to bounce his performance off of Greenstreet, and with only a limited number of performances shared by the two greats, I’ll take what I can get. Bogart again gives 100% to this role, even if it is just a sad and condensed version of the classic film.

If you’ve got nothing else to listen to in the car, go for it. I might make it sound a little worse than it is, but the 1946 version is definitely a step up!