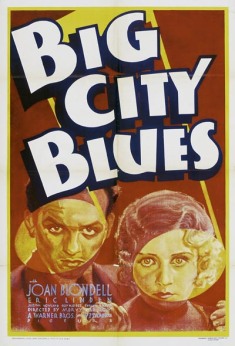 Small town boy Buddy Reeves (Eric Linden) takes a train bound for New York in order to follow his dreams, but it’s not long before his swindling cousin Gibby (Walter Catlett) lands him in hot water after they throw a party with tragic consequences.

This one was a must see for me since it was Bogart’s first film with Warner Brothers, the studio that would eventually turn him into a worldwide star.  With a running time of just over an hour, it’s a quick watch, which works in the movie’s favor as any more time spent with these two-dimensional characters would probably start to become a little taxing on the viewer.  While I did find a few good things to like about Big City Blues, it seemed like a film that was confused with its own genre.

Is Big City Blues a warm-hearted fish out of water story?  It certainly begins that way.  As we watch Buddy Reeves leave his dog behind and wander around the big city in search of the American dream, we can’t help but get a little caught up in his wide-eyed naiveté.  Two grandfatherly train station agents give Buddy a ribbing about his high hopes for New York and send him on his way with a pat on the back.  Then, when we meet his fast talking, money leeching cousin, Gibby, we’re ready to watch Buddy learn a few hard lessons about trust, before finally mastering the fine art of big city survival through a little earned cynicism.

Is Big City Blues a comedy?  Yes!  There are all sorts of great comedic moments, many stemming from the wonderfully funny character work done by Walter Catlett as Cousin Gibby.  This was a role that Catlett was born to play.  He’s a tornado of energy and bravado as he whirls through each scene, keeping the other characters spinning like plates in the air as he spews out one flattering lie after another in an attempt to garner as much cash and freebies as possible.  Throw in the two European waiters that sound exactly like an Andy Kaufman routine, the floozy party girl who bats at her own image in the mirror like a cat, and the drunken hotel detective, and you’ve got the makings of a great comedic ensemble.  The opening New York montage even feels like a much broader vaudeville-like series of sketches as we see construction workers and businessmen caught up in the Big Apple’s zany rat race.

Is Big City Blues also a graphically shocking tragedy where a horrific murder happens out of the nowhere and throws the rest of the movie into a depressing tailspin?  Uh . . . yep.  For about twenty minutes towards the end it is, and that’s where I found the biggest problem with the film.

The murder that occurs is so dreadful and out of sync with the rest of the movie that when Buddy valiantly predicts a return to New York in the end, it seems a little calloused and borderline sociopathic.  Really?  The murder of an innocent woman and Buddy’s near execution for someone else’s crime didn’t permanently scare him away?  He was able to shrug it off that quickly?

Oh!  And I almost forgot to mention that the day is triumphantly saved when a man gruesomely takes his own life in a closet!  That’s how the case is finally closed so that Buddy and his friends can go free.  Thank goodness for suicide, right?  (And no, don’t stop to question the lackadaisical detective work done with the murder evidence!  No finger prints needed!  If the broken bottle fits, you must acquit!)

Playing Shep Adkins, one of the party goers involved in the murder, Bogart gets a role that falls somewhere between cameo and bit part.  With perhaps ten lines of dialogue in the whole picture, he doesn’t get much time to shine.

That being said, what few lines he has are pretty good:

Bogart:  (READING THE PAPER) Nope, the old town ain’t what it used to be.  Look’it here now – cops grab a fella for a stick up.  He’s got two guns and a butcher knife in one pocket, and a powder puff and a lipstick in the other!

And then when the party’s about to move to a nightclub, one of the women jokes that she should call home for permission:

Party Girl:  I should call my mother!

Bogart:  Quit your braggin’!  We all got mothers!

At thirty-three years old, and at the very beginning of a long and storied career, Bogart looks young, vibrant, and ready to take on the world.  Just don’t go to the bathroom or you might miss his smiling face in this film!

Eric Linden as Buddy Reeves is about as stereotyped a character as you can get for a small-town-boy-heads-to-the-big-city story.  That being said, he’s very likable, and most of the character’s flaws can be chalked up to weak writing.  The Aw, gee shucks routine does start to get a little old . . .

Walter Catlett is amazing as Cousin Gibby.  He’s so good at being a conniving sleaze that you just want reach through the screen and slap him.  Try not to smile the second time he says, “Just an old fashioned hitch!”

Joan Blondell plays Vida, the showgirl that Cousin Gibby uses to con a little more money out of Buddy.  I know that we’re supposed to believe that she actually falls for Buddy a little bit, but I don’t know if I ever truly bought it.  It’s not Blondell’s fault, though.  She just doesn’t have much of a character in the script to work with.

Guy Kibbee portrays the drunken Hotel Detective and he plays the line between competent and bumbling just well enough to serve his purpose.

Again, there wasn’t a lot to work with here, but there was one great moment towards the end where we get a little bit of classic Bogart when Shep Adkins refuses to give the proper gravity to a dire situation. The whole party crew has been rounded up at the police station to be grilled and possibly tried for murder.  While everyone mills around fretting, Bogart’s Shep leans over to Buddy and cracks, “Meant to ask you, Mr. Reeves.  Now how do you like New York?”  Pretty calm for a guy who could easily have been convicted as an accomplice for murder!

Not a must see unless you’re a completist, or perhaps a huge Joan Blondell fan.  A few good laughs, but largely forgettable.