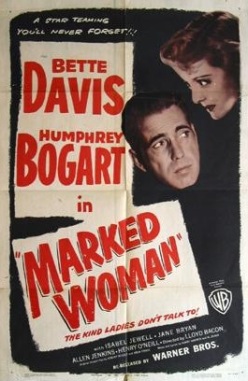 This is the third Lloyd Bacon / Humphrey Bogart movie that I’ve reviewed since starting the blog – the first being Action in the North Atlantic, and the second Brother Orchid – and again, Bacon comes off as a good, straightforward, meat and potatoes director who gets the job done.

Loosely based on the fall of gangster “Lucky” Luciano, Marked Woman is a ripped-from-the-headlines film that Warner Brothers used to love cashing in on during Bogie’s time.

Bette Davis plays Mary, a high priced “hostess” working for an exclusive nightclub called Club Intimate where she’s tasked with doing whatever it takes to distract wealthy men while they’re being overcharged for champagne and gambling away their fortunes.  Even though the most we ever see Mary or her coworkers do is kiss the men they are assigned to, hostess is apparently the code word for prostitute as it’s intimated much more might happen as the women attempt to swindle the customers.

As shady as the job is for Mary, it gets even shadier when the club is taken over by Johnny Vanning (Eduardo Ciannelli), a notorious gangster who’s been able to keep one step ahead of the law, including Assistant District Attorney David Graham (Humphrey Bogart).  Mr. Vanning makes it clear from the beginning that he’s going to be a little more strict and demanding of his employees, and the hostesses know Vanning’s murderous reputation too well to put up a fight.

Even with the new, rougher management, Mary is still on board to do the job.  You see, she’s really a “hostess” with a heart of gold as she’s only doing the work to put her little sister, Betty, through school.  She even goes so far as to help Vanning embarrass ADA Graham in court, not knowing that in a short time she’ll be returning to the attorney’s office, pleading for the government’s help.

Mary’s sister, Betty (Jane Bryan), pays a surprise visit to the apartment where Mary and the other hostesses live, and before you know it, she’s tangled up in the business at Club Intimate, and winds up dead by Vanning’s own hands.  What follows is a desperate attempt by her older sister to bring the gangster to justice.

Bogart might get second billing on the poster, but in reality, he’s fourth or fifth down the line when it comes to screen time.  While it’s fun to note that the roles of criminal and do-gooder have now switched between Bogart and Davis since Petrified Forest, I didn’t feel that the same tension and chemistry between the actors was there.

Davis does a good job in her scenes with Ciannelli, but the script leans heavily on extravagant melodrama, and the ripped-from-the-headlines tone of the film is almost too clichéd in this day and age to have the same impact it did in the 30’s and 40’s.  So while it scores well with online reviews, it’s towards the bottom of the films that I’ve done so far.  (But then again, I enjoyed Swing Your Lady far more than the rest of the world, so what do I know?)

There is plenty to appreciate in this film though, as the cast has been put together well, and it’s always fun to see Bogart and Davis looking so young in their roles.  Davis is as bright-eyed and gorgeous as she ever would be, and Bogart has got the healthiest, most filled out physique that I ever remember seeing on him.

Davis throws herself fully into the character and seems to be committed deeply to the role.  As I understand it from the DVD extras, this was her first film after a drawn out fight with the studio, and she was itching to get back in front of the camera. Her passion shows.

Whether it was originally in the script or added for Bogart, there is a conversation where ADA Graham tells Davis that they’re both from the wrong side of the tracks and it’s not too late for her to make good.  This does a little bit to explain why a man of Bogart’s stature would let his accent slip a bit earlier in the picture as he tells Vanning, “I’m going to indict you for moider!”

The women making up the group of hostesses that Davis lives with are all great, especially Lola Lane as Mary’s main confidant Gabby.  Lane is able to add a sullen darkness behind her role that I’m not sure the wide-eyed and chipper Davis was ready to show yet at this age.  (Although, my pre-1937 Bette Davis knowledge is pretty slight, so feel free to guide me towards some heavier films from her early years!)

Mayo Methot is Estelle, the hostess who’s getting a little long in the tooth to be attracting the high rollers, and Methot is very good here at playing desperate and bitter.  I have no doubt that most classic movie fans will recognize her as Bogart’s third wife.  They met and fell in love on the set of Marked Woman.

Eduardo Cianelli is truly menacing as Johnny Vanning.  While it would have been fun to see Bogart take the role just to get the screen time, Cianelli holds his own and does a great job bringing the necessary intensity and intimidation to the part.

I should put this in “The Great,” and probably would have if he’d had a little more screen time, but character actor Ben Welden plays Charlie, Vanning’s right hand thug, and he does it as well, if not better, than most others could.  Stocky, grimacing, and always looming in the background, Charlie is the thug who gets the jobs that even Vanning won’t take.  Do you know how hard it is to transcend the typical movie thug?  Welden is very good!

Bogart is sitting behind the desk.  The woman in distress comes in, searching desperately for help.  While it doesn’t play out quite the same here as it would four years later in The Maltese Falcon, we do get a little precursor to one of Bogart’s most famous scenes.  He’s calm, cool, and collected as he sizes Davis up, deciding whether or not the woman who’s appeared before him can be trusted.

While this is a must see for any Davis or Bogart fan, it’s not quite heavy enough on the Bogart screen time to satisfy a decent Bogart fix.

Davis apparently had a real doctor bandage her face after her beating at the hands of Charlie the thug since the makeup crew’s job wasn’t to her satisfaction.