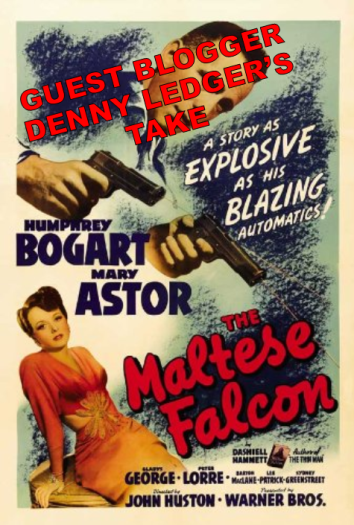 John Huston, who had worked his way up through the writing ranks of more than one studio, was finally given a shot at directing in 1941. The picture he wanted to make was The Maltese Falcon, and that was perfect as far as Warner Bros. was concerned.

The novel, written by Dashiell Hammett, and itself coming from a serialization in Black Mask ‘pulp’ magazine, had been purchased a decade before, and had already been made twice before.

The novel was published on February 14th, 1930, and initially Paramount had considered purchasing the film rights, however, it was Warner Bros. who completed the deal, and for $8,500 they purchased the rights from Alfred A. Knopt on June 23rd, 1930.

Less than a year later, a film adaptation would be released. Originally titled Woman of the World, but changing back to The Maltese Falcon, the film would star Richard Cortez as Sam Spade, with Roy Del Ruth directing.

Here, Spade was an annoying, smug, smart aleck playboy rather than a cynical, world weary private eye of the novel.

Hammett had no hand in the film and did not like the finished picture.

Five years later, in July 1936, a second film adaptation was made. Originally titled Money Man, it was later re titled Satan Met A Lady.

The film starred Warren Williams as Ted Shane in the Spade character, and Bette Davis as Valerie Purvis in the Miss Wonderly role. Davis would consider it, “one of the worst turkeys I ever made.”

It was a screwball comedy with the falcon now a ram’s horn. It was a commercial and critical failure. Again, Hammett did not like the picture.

A third adaptation was attempted in 1939 under the title The Clock Struck Three, however, Charlie Chan screenwriter Charles Belden had issues over writing the second half of the story. The project was abandoned.

A third adaptation was made five years later in 1941, again titled The Maltese Falcon, it was a film that at last met Hammett’s approval.

Huston’s success was in remaining as faithful as possible to the source material, as he had done with W.R. Burnett’s High Sierra, also in 1941. Huston, like Hammett, had not been impressed with the two previous film versions, and armed with a $381,000 budget, 36 days allocated for shooting, and what he would later call “the best cast I ever had,” set out to make his debut picture.

George Raft topped the proposed cast list written up by the studio for Spade, but, as fortune would have it, he would turn down the picture, not wanting to work with an unknown, inexperienced director.

The role went to Bogie, Huston’s preferred choice, and in their hands, Spade become the cynical, hard-boiled private eye that Hammett had written, living in an un-glamorous, amoral world, living client to client, and putting himself on the line for $25 a day plus expenses.

For the role of femme fatale Brigid O’Shaughnessy, Geraldine Fitzgerald was first choice. The role, however, would go to second choice Mary Astor, who relished playing the role, calling her “a congenital liar and slightly psychopathic.”

For the role of perfumed and prissy Joel Cairo, Peter Lorre was cast.

The rest of the cast would include Bogie regulars Jerome Cowan as Spade’s partner Miles Archer and Gladys George as Iva Archer, Miles’ wife.

There was also a screen debut for 61-year-old, 285-pound British stage actor and veteran of Broadway, Sydney Greenstreet, as Kasper Gutman, marking the first of several films with both Bogie and Lorre. There was even room for Huston’s father, Walter Huston, as Captain Jacobi of the ill-fated ship ‘La Paloma’, who delivers the falcon to Spade’s office, only to drop dead from gunshot wounds.

The film opens with an explanation of the backstory to the black bird:

In 1539, the Knights Templar of Malta, paid tribute to Charles V of Spain, by sending him a Golden Falcon encrusted from beak to claw with rarest jewels- – – – – but pirates seized the galley carrying this priceless token and the fate of the Maltese Falcon remains a mystery to this day.

Spade and Archer are a private detective service in San Francisco. A new client, Miss Wonderly (aka Brigid O’Shaughnessy), asks Spade to track down the seducer (called Floyd Thursby) of her, as we later find out, non-existent sister, Corinne. In actuality, she wants him to trail and kill a rival hunter of a rare artifact she is tracking. Miles enters and agrees to take the case personally, and is promptly killed, and Spade is thrown into the hunt for the infamous Maltese Falcon, introduced in turn to Cairo, Gutman and co. along the way.

The film is a commentary on the greed of man, a probing character study, and the cast are equal to it, headed by the cynical Spade, whose strong code of ethics are the only thing keeping him on the level.

In part, the attention to detail from the book came from the performances of the actors. From Bogie, rolling his own cigarettes and facial tics, Lorre fiddling with his cane. Greenstreet on the other hand, does very little, but sit motionless, watching and listening. The camera spends a good deal of time focused on the person who isn’t talking, watching reactions of the listening actor.

Spade is rightly cautious, and distrusts words, both verbal and written; he is also wary of the detectives Dundy and Polhaus, keeping them at arm’s length with a mixture of respect and distrust.

Ultimately though, Spade’s greatest nemesis is himself.

He set out to avenge his partner’s death, and he achieves just that, but only just, as his own greed for the black bird spills over, and when he finally gets the bird, brought in by captain Jacobi, he squeezes Effie’s arm, not noticing even when she tells him ‘you’re hurting me’, and again at the climax where he along with Brigid, Cairo, and Gutman lustily unwrap the prized item in his apartment.

His weakness for Bridgit almost convinces him to sink to her level, but he finds a higher duty, as he explains to her, “when a man’s partner is killed, he’s supposed to do something about it.”

He’s supposed to; it does not mean he necessarily wants to.

He sees through Brigid’s various masks of innocence and vulnerability and sees in her what she really is: a compulsive liar, yet he still allows himself to fall for her, with it only being his code that saves him. In Brigid, as in the Falcon, she is a false prize.

While there is no ‘good guy’ in the film, far from it, Spade is the one who has our loyalties. Spade looks out only for himself, a strong character trait throughout Bogie’s work. Gutman is also self-interested, perhaps why there is a mutual liking between the two, going as far as Gutman asking him if he would join the quest for the black bird as they embark for Istanbul.

Huston filled the film with in-jokes at every available opportunity. As Spade looks down on the spot where Miles is killed, in the background on a wall we can see a poster for Bogie’s 1938 hillbilly, wrestling, musical comedy, Swing Your Lady, a film Bogie would call, “the worst picture I ever made.”

Later on in the film, as Spade walks down the streets of San Francisco, we see The Bailey Theatre in the background, and the film they are showing is The Great Lie, a film that starred Astor. Spade then walks past another theater showing The Girl from Albany, not a real picture, but an in-joke at the expense of Hal Wallis, who, for reasons undetermined, wanted to change the title to The Gent from Frisco. However, Jack Warner did not approve, and kept it as it was.

The film opened on October 4th, 1941 and was a commercial and critical success. James Agee would call the film, ‘the best private-eye melodrama ever made,’ and the film was recognized by the Academy who nominated it for three awards.

The film was up for Best Picture, Best Screenplay for Huston and Best Actor in a Supporting Role for Greenstreet.

Astor for The Great Lie would be nominated for Best Actress in a Supporting Role for her performance as Sandra. In her autobiography, A Life on Film, she would say she would have rather got her award for Brigid than Sandra.

Spade is both a classic Huston and Bogie hero. He is flawed, an anti-hero living in an amoral universe, he is his own worst enemy, but who ultimately overcomes these flaws. Not all Huston protagonists would be so lucky as to get out alive, and Spade only does by the finest of margins.

As for Bogie, his Spade was wounded, cynical and romantic, if not in a traditional sense. It would be a character Bogie would play again and again over the coming years as he rose to the top Hollywood’s acting talent.

*Take 2 is a regular feature on The Bogie Film Blog where other film writers and enthusiasts wax philosophic on their favorite Bogie Films!  Denny Ledger is the author of the new book A Reasonable Amount of Trouble: The Films of John Huston and Humphrey Bogart, which you can find on Amazon here.  For other Take 2 posts, click here.*