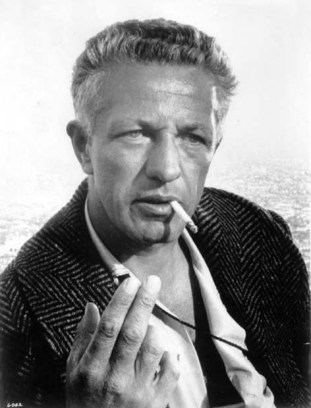 Number of Films that Nicholas Ray Made with Humphrey Bogart: 2

According to the Sperber/Lax Bogart bio, Director Nicholas Ray “had an affinity for pictures about the disaffected…” Collaborating with Bogart on the back end of the icon’s career, and also during what some may argue as the most disaffected portion of the actor’s artistic and political life, Ray was there to capture Bogart on screen in a way that was more deeply personal than any other director in his filmography.

The more I read on Ray, the more I’m in awe. The man lived a Forrest Gump-like life in the best possible ways, collaborating over his career with such varied talents as Frank Lloyd Wright (they parted over politics), Elia Kazan, Alan Lomax (a personal hero as I listen to his work daily), Woody Guthrie, and even the great James Dean among many others. Perhaps best known for his work with Dean on Rebel Without a Cause, what a tragedy it is to hear that they’d planned to collaborate on more films together before Dean’s untimely death.

While Ray and Bogart worked together twice, the bigger story might be all the times they almost worked together but fate intervened. Bogart wanted to do a version of The Old Man and the Sea with Ray directing. (Bogart best friend Spencer Tracy would go on to film it a year after Bogie’s death.) Ray was also in the mix to direct Beat the Devil at one point. (How DIFFERENT would that film be with the emotionally charged director in the power chair?) And Bogart also talked with Ray on another project, The Ferry Boat Story, that never came to fruition because Bogart decided to make The Caine Mutiny.

Regardless, we do have two wonderful films in which they worked together. I’m more than elated to place Director Nicholas Ray into The Usual Suspects today!

Knock on Any Door was the first movie produced by Bogart’s film production company, Santana, and I would have to say that it was a great film for Bogart’s crew to start with – despite the fact that neither Director Ray nor Bogart were satisfied with the final results.

Based on the bestselling book by Willard Motley, Bogart handpicked Ray after being impressed by his directorial debut in They Live by Night. There have been reviews written that accuse this film of doing some over-the-top grandstanding, preaching on the dangers of social injustice. I couldn’t disagree more. How our country treats the lower class is most definitely not a black and white issue, and I think Director Ray makes sure to leave us on an authentic moment of uncertainty at the end of the film. People that we might consider “bad guys” aren’t always bad guys. Heroes we look up to sometimes make life and death mistakes. Knock on Any Door is less a movie about our country’s war on poverty, and more a film about our societal struggle with the flawed criminal justice system.

Bogart’s wonderful here as attorney Andrew Morton. I’ve read more than a few blogs and reviews that compare his final courtroom scene here to his ending moments as Captain Queeg in The Caine Mutiny. I would agree with that on a lot of levels, but the role of Andrew Morton is much more restrained as it builds towards the big speech at the end. And while both men are essentially breaking down emotionally, Morton’s scene is more of an emotional breakthrough – something that Director Ray was so incredibly deft at handling. 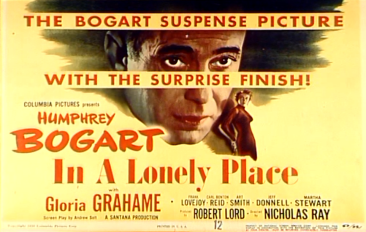 An emotional punch in the gut, Director Nicholas Ray reportedly wrote many of the relationship scenes between Bogart and costar Gloria Grahame based on his own failing marriage. As you can guess, this film is good with tension.

What is so interesting to me about this film is that it raises questions about the responsibility that society bears on handling the behavior of unstable people. Bogart’s Dixon Steele has proven to be a valuable member of society with a lot to contribute to the arts. He could have continued to thrive during his personal struggles with the proper support from their peers. Ray though, crafts a story in which we get to watch Steele systematically tumble one step after another into a deep state of rage and distrust for those around him, finally sabotaging his personal relationships and career.