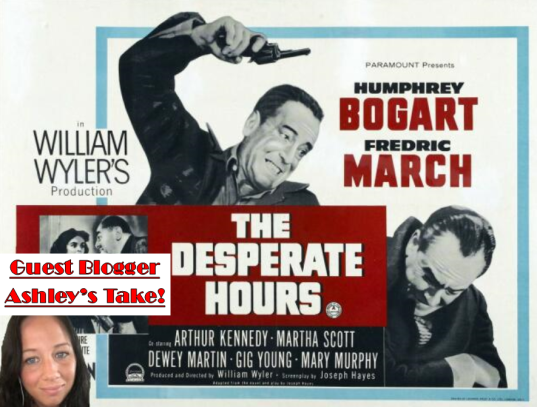 I believe the year was 2012 when I first started my trek through Humphrey Bogart’s work. Due to my compulsion to view every cinematic interest in chronological order, I rarely get to completely finish the filmography journeys I start. I miss more late entries on actor’s filmographies than I would like. The Desperate Hours was one of those late roles I sadly missed, so I was more than excited about finally seeing this film.

The Desperate Hours was the second to last film Bogie made, in 1955. Directed by William Wyler, the story follows a group of convicts who take over a suburban family’s home, holding the Hillard family hostage while they made a plan to escape police. I am also a fan of Fredric March, so his presence in this film made me all the more excited to finally see it. The Desperate Hours also takes place largely in one setting which is my favorite film sub-genre, so it is really perplexing that this film has eluded me for years. Anyway, it was finally time to see Bogie, March, and company in Wyler’s The Desperate Hours.

After you’re done reading Ashley’s take, don’t forget to check her out on Twitter here and her movie diary at her Letterboxd site here!

Thanks, Ashley, for your help this month for the Bogie-A-Day Blogathon! You can read my original post on The Desperate Hours here!