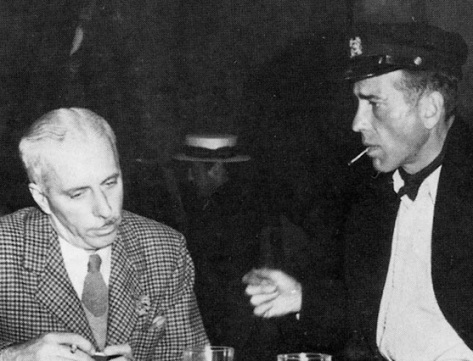 Number of Films Howard Hawks Made with Humphrey Bogart: 2

All that Howard Hawks needed to make a movie was one woman and one man.

Russell and Grant. Stanwyck and Cooper. Bacall and Bogart.

Put them in a room together. Give them a reason to touch – any reason. A cigarette needs to be lit. A bottle needs to be passed. Someone needs to squeeze through a doorway. It doesn’t matter. But don’t let them touch right away. Make us wait for it. Let them banter first – sharp words that would wound any mere mortal. Then let them stare. Maybe for a moment, maybe for longer. What are they doing to each other in their minds? Is it as lascivious as what I’m thinking? Wait until the tension is perfect. Now let them touch.

There are a lot of great stories out there about Howard Hawks. He could drive studios, actors, and crews mad with cold indifference. He could also garner incredible admiration and devotion from others – like a certain young protégé who was looking to break into acting while still a teenager – Lauren Bacall.

Many give credit to Hawks for crafting the wise-beyond-her-years image of Bacall that we all know and love. But reportedly, Hawks was not happy when she and Bogart began their behind-the-scenes affair on To Have and Have Not. He blew up at Bacall. Bacall broke down to Bogart. Bogart blew up at Hawks. The pic was almost delayed. The studio smoothed it over.

Regardless of the tumultuous relationship between Hawks, Bacall, and Bogart, no one can argue that two of Bogart’s greatest films came from the famed director. 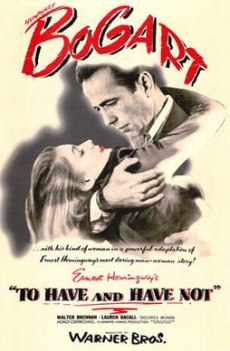 There have been countless pages written about the making of this movie, the love affair between the stars, and the lore of Howard Hawks behind the camera. It’s all worth a read and it only adds to the film!

This is the film where we get to watch two of Hollywood’s most classic icons fall in love before our very eyes. While the studio might have been trying to recreate another Rick and Ilsa sensation that fell a bit short of captivating the world like it did in Casablanca, there is no denying that the two leads here light up the screen with fireworks that few other couples have ever been able to capture.

Full disclosure – this is my favorite Bogart film from his whole list. Walter Brennan, Marcel Dalio, Dan Seymour, and Hoagy Carmichael help round out an incredible cast. The script is fun. Hawks’ direction is tight. What’s not to love? 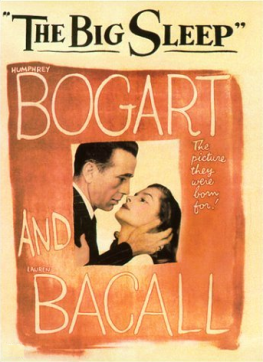 What sets up The Big Sleep as a Film Noir classic is the fact that the cast, director, and style of the film more than make up for the complicated plot. You don’t need to grasp every little detail to enjoy the chemistry between Bogart and Bacall – or Bogart and every single other female in the film for that matter. There are no wasted characters here, as Director Hawks has assembled an amazing cast and knows exactly how to make them interact so that we get the most bang for our buck.

This is a film where the sum total is greater than the individual parts, and the parts are pretty doggone fantastic. So the plot isn’t ironed out because they dropped some key scenes to make way for more Bacall and Bogie magic? It doesn’t matter in the end.  Hawks visually and audibly gives us exactly what we yearn for, and so we can forgive him the rest.

The Original Pre-Release Edit of The Big Sleep – 1945 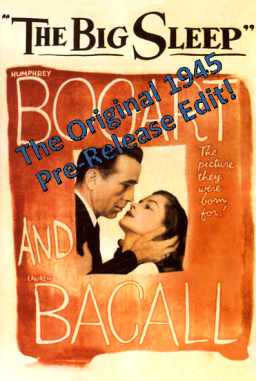 The widely accepted and well chronicled story is that Lauren Bacall’s agent, Charles Feldman, started to get nervous about his new young wunderkind after horrible reviews were written for her performance in the film Confidential Agent. Agent was Bacall’s follow-up film after becoming an overnight sensation alongside of Bogart in To Have and Have Not, and Feldman was apparently panicking at the idea of Bacall disappearing into Hollywood obscurity after being labeled as a one-hit wonder.

With the film already delayed, Feldman wrote to Jack Warner, pleading to reshoot some scenes and add more of the fiery romantic flavor that Bogart and Bacall shared in To Have and Have Not. Warner agreed, Director Howard Hawks eventually relented to rework some shots, the stars reassembled a year after production, and seven reels of the film were altered with reordered scenes and a little over 20 minutes of new or alternate material.

So how different is the original film?  Well, I would bet that most casual viewers could watch both versions with a year in between and not notice much difference as the plot is still essentially the same.

For me, the biggest change was a scene that was cut from the original version before the final release of the film in which Bogart is taken into the District Attorney’s office in order to explain his involvement in the murder case to the DA and the police captain. It’s here that Hawks took time to break down everything that had taken place in the plot so far as Bogart tells the two lawmen about his involvement in the case and his assumptions about all the guilty parties involved.

You can read my original write up on the film here.