A war vet (Humphrey Bogart) visits the Florida Keys to pay his respects to the wife (Lauren Bacall) and father (Lionel Barrymore) of a friend who died in combat, only to stumble upon a gangster (Edward G. Robinson) on the run just as a hurricane strikes.

There’s not a wrong note in this whole film. The cast is superb, and while Claire Trevor is the only actor from the film to win an Oscar, it surely wouldn’t have been a surprise if Barrymore and Robinson had at least been nominated as their performances are stand-out wonderful as well. (Fortunately or unfortunately – depending on who from this film you consider – the main competition for the Oscar race that year was another little Huston film called Treasure of the Sierra Madre and Laurence Olivier’s Hamlet. Huston snagged Best Director and Best Screenplay for Madre, so I imagine that Trevor’s win for Best Supporting Actress here and Walter Huston’s win for Best Supporting Actor in Madre were just the icing on the cake for him.)

The real story of this film is the interplay between Bogart and Robinson. Much of Bogart’s early career was spent playing second fiddle to Robinson when Robinson was still at the peak of his stardom. Here though, the roles are reversed. Or are they? Yes, Bogart is top billed playing his oft-stoic protagonist war hero that happens along just in time to save the day and get the woman, but it’s clear that Key Largo is Robinson’s film to steal.

From the moment that he appears onscreen taking a bath, Robinson controls almost every scene throughout the rest of the picture. My wife, who is often reading or working on her computer in the background while I watch Bogart films, glanced up the moment Robinson was introduced and didn’t take her eyes off of him for the rest of the film. Afterwards, I asked her, “Like that guy? You didn’t take your eyes off of him?”

But she watched. Regardless of the fact that he possessed a face that no caricature could ever exaggerate enough, Robinson exuded charisma and raw energy out of every pore. You can’t not watch the guy when he’s on screen. Huston and Bogart give him plenty of room to work with too, letting him take center stage at almost every moment to wring out a performance that I would rank as one of his best.

It’s fun to note that the final confrontation on the boat was apparently the original ending to Howard Hawks’ To Have and Have Not. When Huston couldn’t think of an ending to Key Largo, Hawks offered this one and Huston took it! It gives Robinson an incredible finale to a stellar performance!

Bogart’s war vet, Frank McCloud, is essentially a rehash of a whole list of previous characters that he’s already played. A loner ex-soldier, McCloud is there to stop the bad guy and get the girl – period. It’s not colorfully written, but it’s not supposed to be. He’s there to glue together the rest of the cast that is both literally and metaphorically caught up in the middle of a storm.

Again though, if you’re going to cast a leading man that needs to be tough, brooding, and still sympathetic – can you do better than Bogart? Especially when he’s in the hands of a director like John Huston who’s going to use Bogart’s skill set to its fullest potential while making every frame that he’s in feel like an iconic image of Hollywood’s greatest star.

Is this Bogart’s best role? No. But it’s a textbook example of what a great actor can do with a stock “hero” character.

Edward G. Robinson is a force to be reckoned with as the mobster on the run, Johnny Rocco. Playing a gangster who’s on the verge of losing his most valuable weapon – his confidence – we get to watch Robinson strut, punch, slap, yell, threaten, sweat, quiver, and cower all in just an hour and forty minutes. On the receding side of his career, this was supposedly a “thank you” role for Robinson after giving Bogart so much time to shine in their earlier collaborations together. Robinson nails it. No matter what’s going right or wrong for Rocco in any given scene, there is an underlying sense of fear present that pervades every word and action on display.

Claire Trevor plays Robinson’s girlfriend and former lounge singer, Gaye Dawn. She’s great in the role, and not surprisingly, won an Oscar for her performance as the gun moll that’s living out her last years in the bottom of a bottle while clinging to a madman who gave up on her a long time ago. One of the best behind-the-scenes stories from this film is that Director Huston sprung Trevor’s a cappella performance of “Moanin’ Low” on her the day of shooting. If true, it certainly helped give Trevor a shaky and painful performance that’ll make you cringe in the best possible way.

Lauren Bacall plays Nora Temple, the widow of Bogart’s army buddy who died in the war. Like Bogart, the role isn’t anything special, but Bacall plays it as well as anyone could. She’s strong, defiant, and just soft enough to care for the stranger who has stumbled across her doorstep. The real life chemistry between these two carries over well into the film, and the close ups they share together are worth the price of admission alone.

Lionel Barrymore plays James Temple, the wheelchair bound father of Bogart’s dead friend. Barrymore is really good here and gets plenty of opportunity to wrestle scenes away from Robinson – especially the moment he leaves his very real and necessary wheelchair in order to take a swing at the gangster. His affection for Bacall feels real as well, and it’s not hard to lose yourself over to this grieving father who’s trying to pull the right strings to get Bogart to stay on at his hotel and take care of his daughter-in-law.

Thomas Gomez, Harry Lewis, and Dan Seymour play Robinson’s gang, and they’re each wonderful in their own way. Gomez is a ton of fun as Curly, the gum chomping, wise crack spewing, henchman. Lewis plays a great “little villain” as Toots, the weaselly goon with a hair trigger. And perhaps my favorite is Seymour as Angel. After To Have and Have Not and Casablanca, I need to add him to the list of Usual Suspects. His parts are never huge, but he’s got a great face and a wonderful presence for a character actor.

Look at how Huston introduces Bogart into the film even though his back is initially set to the camera!!! Great shot. Great use of a mirror. A simple scene that was probably much more complicated to block than it looks! 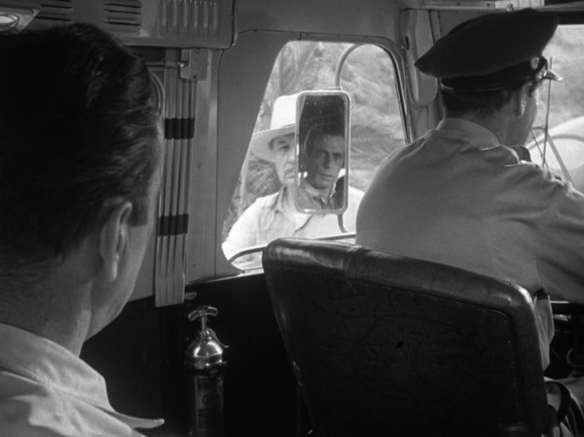 Come for the Bogie and Bacall. Stay for the Robinson and Barrymore. You won’t be disappointed.