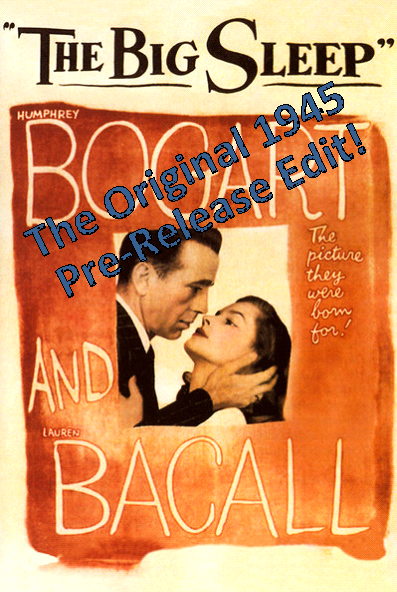 It’s the same plot as the 1946 theatrical release, so if you need the lowdown, check out my original post here.

Revisiting this classic with new and re-edited scenes has been done quite a bit on the web, so if you really want a great write up, check out Roger Ebert’s review that gives an insightful overview of the major differences in the two versions of the film.  For this post though, I’m just going to stick with my gut instincts on the initial reactions that I had to the major differences in this earlier edit.

With World War II coming to a close, The Big Sleep sat on the shelf at Warner Brothers for a year as its release was postponed until all of the war flicks that were in production could be rushed out to theaters in order to capitalize on their subject matter.  While America waited for one of cinema’s best known Film Noir’s to hit theaters, studio execs, agents, and actors were sweating furiously behind the scenes to tinker with the movie, hoping to fix what they perceived to be a few major weaknesses.

The widely accepted and well chronicled story is that Lauren Bacall’s agent, Charles Feldman, started to get nervous about his new young wunderkind after horrible reviews were written for her performance in the film Confidential Agent.  Agent was Bacall’s follow-up film after becoming an overnight sensation alongside of Bogart in To Have and Have Not, and Feldman was apparently freaking out at the idea of Bacall disappearing into Hollywood obscurity after being labeled as a one-hit wonder.

With the film already delayed, Feldman wrote to Jack Warner, pleading to reshoot some scenes and add more of the fiery romantic flavor that Bogart and Bacall shared in To Have and Have Not.  Warner agreed, Director Howard Hawks eventually relented to rework some shots, the stars reassembled a year after production, and seven reels of the film were altered with reordered scenes and a little over 20 minutes of new or alternate material.

So how different is the film?  Well, I would bet that most casual viewers could watch both versions with a year in between and not notice much difference as the plot is still essentially the same.

Bogart and Bacall’s romance is beefed up considerably.  I felt that in the pre-release version, Bacall comes off as a bit more threatening to Bogart.  Reshoots were done on a few scenes to make her a little more affectionate, and their innuendo-heavy ‘horse racing’ scene was added to help build up the sexual tension.  In the original version though, I thought that Bacall came off as much less trustworthy and there seemed to be considerably more tension as to whether or not she was really on Bogart’s side.

Charles Feldman was also apparently very concerned with removing “the veil scene” with Bacall (wearing a veil, obviously) where he felt that Bacall came off too stiff and amateurish while talking to Bogart.  He shouldn’t have been worried, she was fine.

Martha Vickers role of the wild young daughter, Carmen Sternwood was tamped down a bit in order to put more of the focus onto Bacall.  Vickers was great in the film, had some pretty incredible chemistry with Bogart, and for the most part, her performance in the final release still keeps almost all of what makes her great in the original version.

The biggest change for me was a scene that was cut from the original version before the final release of the film in which Bogart is taken into the District Attorney’s office in order to explain his involvement in the murder case to the DA (played by Thomas E. Jackson) and Captain Cronager (a surly James Flavin doing his best Barton McClane impression).  It’s here that Hawks took time to break down everything that had taken place in the plot so far as Bogart tells the two lawmen about his involvement in the case and his assumptions about all the guilty parties involved.

With so much written about the plot of this film being confusing and indecipherable, this scene is incredibly helpful in keeping everything straight.  There are so many characters introduced so quickly, with two of the most talked about characters (Owen Taylor and Sean Regan) never even appearing alive, that it’s nice to have Bogart give us a little box score on everything we should know.

Does it make that big of a difference in the end that the scene was deleted, cutting Jackson and Flavin out of the film completely?  I don’t think so.  It’s nice to have it in, but I think that the theme of this film has always revolved around truth, and the facts of the murders don’t matter nearly as much as each character’s desire to either chase them down or cover them up.

If you want a really nice scene-by-scene breakdown of the differences between the two versions, I’d highly recommend this post over on movie-censorship.com.  They do a fantastic job of intricately dissecting all of the new and adjusted scenes.

So which version do I like better?  To be honest, I’ve come to the point in my Bogart appreciation that I’m just happy there are two versions and I get to enjoy the film in a fresh way twice in my life.  What a wonderful opportunity for cinema enthusiasts to have the chance for a comparison of the two films and a comprehensive history of how the theatrically release version came about!

The DVD that I got to watch came with a short documentary with film historian XXXX breaking down the major differences between the versions.  It’s a quick easy watch for those who really want to know how the film was changed.

I think it’s wonderful that Thomas E. Jackson and James Flavin finally have a chance to get back into the film.  Both did a good job in an intricate scene that really does add a lot to the film!

My condolences go out to Pat Clark who was completely replaced in the theatrical version by Peggy Knudsen as Eddie Mars’ gangster wife, Mona Mars.  I didn’t find a reason for the switch, but I’m guessing that Clark wasn’t readily available for the reshoots.  Since the role was so small, Knudsen was more than likely used to keep things quick and simple.  The change doesn’t really alter the picture at all, but it’s nice that Clark can now be seen in her original role.

How good was Bogart at thwarting, pestering, teasing, and befuddling authority figures?  We’re told early in the film that Philip Marlowe was fired from the District Attorney’s office for insubordination and it makes this new scene of Bogart spilling the facts (at least the facts that he wants to spill) to the DA and Capt. Cronager all the more entertaining!

Watch them both and enjoy the fact that we have two great versions!