—Well, I did promise to watch them all…—

A newly married pearl trader (Humphrey Bogart) in the South Pacific becomes fond of a man (Donald Woods) that he saves from a shipwreck, only to find out that his new friend might severely complicate his life . . .

I tried to be specifically vague with my description of the film because almost every other plot synopsis that I’ve read gives away a major plot twist without even mentioning that it’s a plot twist. That being said . . .

This might be the worst Bogart movie that I’ve watched for the blog so far. Is it unwatchable? No. There are a few fun bits tucked away here and there. There’s an outrageously goofy fight between Bogart and an octopus that clearly marks Isle of Fury as a B-movie. There’s also a little bit of chemistry to be had between Donald Woods and Margaret Lindsay. I’d even give a nod to some decent work from E.E. Clive as Dr. Hardy. Beyond that – this movie doesn’t have a lot going for it.

I put almost all of the blame on the plot. When the twist is revealed, you might think that this film had a lot more potential than it delivered. But even the twist comes too late, as its set up occurs at the very end of the film, just before the big reveal.

It’s also pretty tough to feel any sort of sympathy whatsoever for Bogart’s pearl merchant, Val Stevens. So you’re telling me that there’s only one marriage-aged bachelor on this island and one marriage-aged bachelorette, and the moment that another young man arrives, the recently betrothed husband doesn’t get a little bit nervous? Bogart spends most of the film practically throwing his new bride at Donald Woods shipwrecked stranger.

Within moments of acknowledging that he doesn’t know a thing about Woods, Bogart asks him to walk his wife back to her hut through the dangerous jungle. Later, Bogart encourages Woods to dance with his wife because he doesn’t like dancing. Then comes a scene where Bogart asks Woods to drop in on his wife once in a while because he works so often and she gets lonesome. And let’s not forget Bogart asking Woods to carry his wife through hip deep water so she won’t get wet – despite the fact that Bogart is also walking through the water and could carry her just as easily.

We get it. The plot requires Donald Woods and Margaret Lindsay to fall in love. But Director McDonald seemed to feel the need to beat the notion into us to the point of absurdity. Even after all of that, even when Bogart seems to suspect that Woods and Lindsay might have feelings for each other, Bogart offers Woods a job because, well . . . he really likes him!

I hate talking badly about any Bogart or Classic Hollywood film because we only have a limited supply to last us for the rest of eternity! Isle of Fury though, is probably only a must see for Bogart completists.

On a more positive note, the special effects are a treat. The storm scenes raise the bar for what I expect from a B-movie, and the giant octopus fight is so over-the-top bad that it’s enjoyable.

Isle of Fury is a remake of 1933’s Douglas Fairbanks Jr. vehicle – The Narrow Corner. While I haven’t seen The Narrow Corner, it does receive slightly better reviews than Isle of Fury, so I’m intrigued. The plot has enough potential to work if executed well, so I can see why the studio wanted to give it another run.

Bogart supposedly hated this film so much that he even denied making it on occasion. It’s certainly a bad film, but once again, he has nothing to be ashamed of except for his mustache and wardrobe: 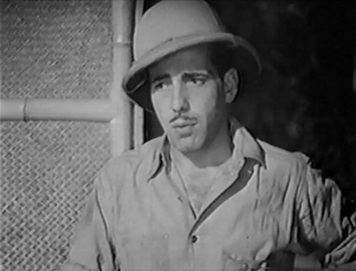 Bogart, as always, throws himself into the role with full gusto, but the script and the direction let him down in the end. Like Crime School, Bogart’s character is so squeaky clean and nice that there’s no room for any character development. That can work for a character if they’re in a smaller side role, but not for the lead. It’s not until the end of the film that we find out there was really something darker lurking beneath Val Stevens. Unfortunately, it comes too little and too late for any sort of decent exploration.

Margaret Lindsay plays Bogart’s wife, Lucille Gordon. She looks great, but the part is underwritten and left with absolutely no subtext whatsoever. When it comes time to build the relationship between Lindsay and Woods, Director McDonald wastes no time with subtlety.

Donald Woods plays Eric Blake, the shipwrecked man that complicates Bogart’s life. Again, much like Lindsay, there’s little for Woods to do here as his part is poorly written. He has a few nice moment of chemistry with Lindsay despite the poor script, and a nice scene with E. E. Clive

E. E. Clive plays Dr. Hardy, close confidant and personal physician to Bogart and everyone else on the island. If anyone besides Bogart has a chance to shine here, it’s Clive. With the most well rounded character in the whole film, Clive does well holding together what few good scenes Isle of Fury can claim.

This film was low on what I would consider “classic” Bogart scenes. BUT! There was one moment, just before boarding a boat, that Bogart straps a gun to his waist. When Lindsay asks him what the firearm is for, Bogart replies, “I’m so used to wearing one of these things, I feel undressed without it!” 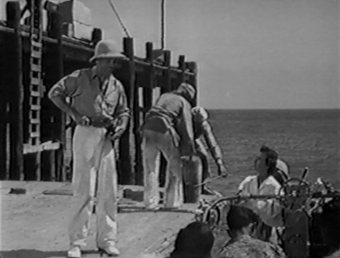 It’s a small, and I’m sure unintentional, nod to all of his great gangster and detective roles that would follow, but I’ll take what I can get!

It’s not hard to figure out why this film is so hard to find. . . but that poster! That almost makes it worth it, doesn’t it?