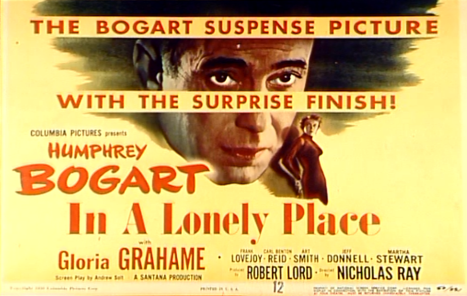 Screenwriter Dixon Steele (Humphrey Bogart) falls under suspicion of murder after a woman he invites to his apartment winds up dead.  A small time actress (Gloria Grahame) provides Steele’s only alibi, and they begin to fall in love after she becomes his typist.

There could be a great film lecture solely devoted to the subject of paranoia and anger as it relates to the two main characters in The Caine Mutiny and In a Lonely Place.  Here again, much like Captain Queeg, Dixon Steele is a brilliant and respected man who’s brought low by his personal demons and tragic flaws.  Any hope that he can rise above his problems is repeatedly dashed by the friends and acquaintances around him who will not let him forget his shortcomings.

Director Nicholas Ray gets a superb performance out of Bogart, and other than a final act that lasts a few minutes longer than it should, this is a tight and thrilling movie.  Like Queeg, we think that we know the facts behind Steele’s situation.  Didn’t we see Mildred leave his apartment?  Shouldn’t we be sure that he had nothing to do with her death?   We should, but Director Ray plays Steele’s behavior so sporadically violent that even we start to question his possible involvement in the girl’s death despite what we’ve seen.

What is so interesting to me about this film and The Caine Mutiny is that they both raise questions about the responsibility that society bears on handling the behavior of unstable people.  Both Queeg and Steele are valuable members of society with a lot to contribute.  Both men could have continued to thrive during their personal struggles with the proper support from their peers.  Both men though, eventually crash – falling into deep states of rage and distrust for those around them, finally sabotaging their personal relationships and careers.

Nicholas Ray is certainly a very gifted director and has assembled a capable cast, a tight script, and a solid eye for using his main star to anchor this great film.

I hate to read that Bogart talked poorly of this film in his later years.  Several of his biographies credit his dislike of the film to the fact that the character of Dixon Steele might have been too close to his own reality.  Both Steele and Bogart are incredibly charming and talented men who struggled to contain a deeper, sometimes alienating, bitterness.

Bogart’s negative feelings could also have been residual bitterness from the fact that Warner Brothers refused to loan his production company, “Santana Productions,” the services of Lauren Bacall for the film.  I would imagine that missing out on working with his wife, as well as the knowledge that their real-life relationship could have added an incredible weight to the film, might have made him a little sour on the experience.

All that being said, this is absolutely some of Bogart’s very best work, as he plays Steele’s societal detachment as a double edged sword that both aids his charm, while still leaving his character open for question when it comes to the murder.  We don’t want to believe that Steele’s guilty, but we have to admit that he’s probably capable.

Bogart is just so doggone charming that you want to hang out with him, share a drink, and shoot the bull.  At the same time, there’s such a painful vulnerability in Bogart, especially during his final scene with Gloria Graham as he leaves her apartment, that we can hardly look at him without great pity.  We see the face of a man, again like Queeg, who’s left stripped of everything he once thought important – an open wound of emotion with nowhere left to turn.

It says a lot about the enduring love for Casablanca, Treasure of the Sierra Madre, and The Caine Mutiny that this performance for Bogart isn’t mentioned more often.  Everything key to his talents and onscreen presence is displayed here.

Gloria Grahame plays Laurel Gray, the woman who falls for Steele and begins to doubt his innocence and stability as the film progresses.  Knowing that Gray could have been played by Bacall is a big shadow to hang over the role, but Grahame is very, very good.  She’s pretty, charming, and even though it’s not overtly stated, her character is obviously dealing with her own baggage in life.  It’s a suitably understated performance, and it makes me want to see more of her filmography.  (Other than her much treasured role as Violet in It’s a Wonderful Life of course!)

Frank Lovejoy plays Detective Brub Nicolai, Steele’s good friend and the investigating officer of the murder.  He is great in the role, and has good chemistry with Bogart.

Art Smith is Steele’s aging agent, Mel Lippman.  Used mostly for comedic effect, Smith does have an amazing scene with Bogart in a restaurant bathroom after being slapped during one of Steele’s rage-filled outbursts.

Robert Warwick is Charlie Waterman, an aging actor and friend of Steele’s who has fallen into the bottom of a bottle after his career has flat lined.  According to A. Sperber’s Bogart, Warwick worked with Bogart early on in his stage career and was a big encourager for the young actor to keep at his craft.  (p. 434).  For that alone, I’ll give Warwick a big nod here!

When Bogart wants to flip a switch from amiable to crazed, I’m always amazed at how fast he can make the transition.  One moment in particular comes when Dixon Steele is explaining to Detective Brub and his wife about how the murder might have taken place.  Much like the mental breakdown during the cross examination scene of The Caine Mutiny, there comes a moment when the character seems to lose himself within his own rationalizations, and a wild-eyed look takes over: 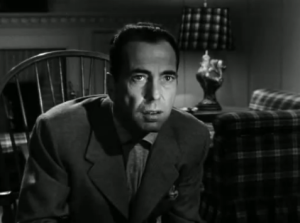 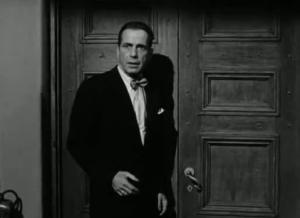 The open hands at the hips, as if he’s ready to draw a gun or strangle someone, often come out when Bogart’s characters are at their most physically dangerous, and it’s a little trait that adds an extra dimension of tension here.

Undeniably one of the best performances in Bogart’s very rich filmography.