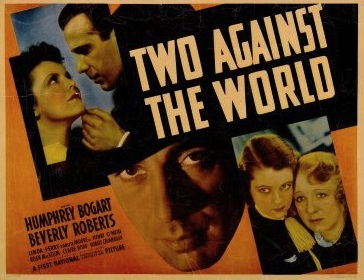 Note:  The film reviewed for this entry was the TCM version, One Fatal Hour, which is about seven or eight minutes shorter than the original theatrical release of Two Against the World.

When a radio station decides to dramatize a twenty year old murder in a grab for ratings, a debate breaks out between the station manager, Bertram Reynolds (Robert Middlemass), and his news director, Sherry Schott (Humphrey Bogart), about the irresponsibility of sensationalizing a real life tragedy.  The matter is complicated when it’s discovered that the murderer in question, Martha Carstairs (Helen Mackellar), is only days away from marrying off her own daughter to a family that has no idea about her tragic past.

I have to admit, anytime I see a movie with multiple titles listed, it usually doesn’t bode well for the quality.  Add to the fact that the runtime for this film is less than an hour (or shortly longer in the full version), and I was well prepared to sit through some awful dreck.  So I was surprised to find that Two Against the World / One Fatal Hour was actually a very tight and enjoyable film.

Based on the play Five Star Final, the story holds up very well as the subject of sensationalized media is as relevant today as it was almost seventy years ago.  Director McGann does a great job of letting us see so many angles of the central argument played out through different pairs of characters – the murderer and her current husband (Helen Mackellar and Henry O’Neill), the oblivious daughter and her fiancé (Linda Perry and Carlyle Moore Jr.), Schott and Reynolds (Bogart and Middlemass), and best of all, Schott and his secretary, Alma Ross (Bogart and a wonderful Beverly Roberts).

While Bogart is given the lead billing, it doesn’t mean that he dominates the screen time.  Bogart’s presence is heavy towards the beginning of the film and especially again at the end, but most of the middle is taken up with the drama surrounding the Carstairs family.  That being said, when Bogart is on screen, he dominates.

Sherry Schott could be seen as an early prototype for Bogart’s Deadline U.S.A. editor, Ed Hutcheson – an ethical business man who tries to keep his company on the moral high ground amidst less disciplined men.  I always think it’s a real credit to Bogart’s talent that he could play killers and business professionals with equal believability and apparent ease.

His final rant against the station managers shows a passion and fervor that make it easy to see how this was a standout role for a young Bogart.  Sherry Schott is a man of deep, ethical convictions – the type of character that Bogart would go on to play in his more iconic roles over the next two decades.

Carlyle Moore Jr., as the young fiancé, Malcolm, has a rare chance to shine here in a Bogart film.  Playing bellhops in Marked Woman and Kid Galahad (where he had an especially funny moment on an elevator with Wayne Morris) and reporters in several other films, I wonder why Moore suffered through so many small and uncredited roles when he shows such obvious charisma in a movie like Two Against the World.  He certainly plays every father’s dream son-in-law.

Harry Hayden plays the minister, Dr. Martin Leavenworth, who’s hired to write the radio series on the murder, not because of his skill, but because a minister will add some class and credibility to the project.  He does well playing the small and mousey weasel who doesn’t mind taking advantage of a woman who’s trying to put her past behind her.

Much of the rest of the cast (Helen MacKellar, Henry O’Neill, Linda Perry) are adequate, but not outstanding.

The real fun comes with Beverly Roberts as Bogart’s spunky secretary, Alma Ross.  Seemingly always a few drinks ahead of the rest of the world, Ross is quick to act as the none-to-subtle conscience of her boss as she never hesitates to offer her opinion on whatever debate’s on hand.  It’s a role that definitely makes me want to track down her other films.

How great is this?  Towards the end of the movie, a dejected Bogart heads to the bar with his secretary in tow.  He barks at the bartender about the radio to, “Shut that thing off!”  After taking a slug of whiskey, he asks the bartender, “Tommy, you ever kill a man?”

It’s as if we’re seeing Ed Hutcheson and Rick Blaine suddenly cross worlds and blend together.  A tough and embittered Bogart drinking in a bar is always magic in film.

Short and sweet, this is a solid role for Bogart.  Be warned, though, this is not a happily-ever-after movie.  I have to imagine that the closing violence and condemnation of sensationalist media had to make this film a bit controversial for its time – especially considering that the movie seems to be coming out against the type of entertainment that was promoted so heavily by Warner Brothers’ (the movie’s own company) ripped-from-the-headlines style of filmmaking.