Boxing promoter Nick Donati (Edward G. Robinson) and his girlfriend “Fluff” (Bette Davis) stumble across an unknown fighting phenomenon when they witness a bellhop (Wayne Morris) knock out an experienced fighter at a hotel party.  Donati immediately sees dollar signs in the bellhop’s championship potential, while his girlfriend Fluff starts to fall in love.  The only problem?  The boxer that the bellhop knocked out works for mobster “Turkey” Morgan (Humphrey Bogart), and Morgan is willing to do whatever it takes to get his revenge on the bellhop, and the fast talking Donati.

It’s a by-the-numbers Warner picture for the time it was made.  It’s not bad, but it’s not great.  It’s predictable, but fun. Robinson and Davis definitely save the day with their great portrayals, turning it into an enjoyable film.

Well, Bogart’s present, I guess.  It’s my lowest “Bogie Fix” review so far, so that should tell you something.  He doesn’t get a lot of screen time, and when he does, he’s relegated to being the stock mob-guy character.  He is able to put a slight twist on it though, making “Turkey” Morgan more of a sniveling whiner than a cutthroat gangster.  This film’s much more suited for a Robinson or Davis fix, as the viewer can go for extended periods of time with no Bogie in sight.

Robinson and Davis as the leads do what they do best.  Robinson is every bit the real life caricature that we’ve all grown to love, and Bette Davis is gorgeous and fun.

Davis plays ‘Fluff’ with a girl-next-door quality that left me wondering for the first half of the movie how she ended up with Robinson.  There is a brief scene in a car with Morris where she alludes to a darker past, but come on, Bette!  You can do better!

The first party scene in the hotel though, where she’s serving drinks in a flower print dress with a low neckline . . . whew – she is GORGEOUS!

Wayne Morris is okay.  He’s big, and stiff, and perhaps a little more dopey than what the script called for.  Although, I was amazed at how much charm he could exude with a smile.  One smile, and you can’t take your eyes off the guy.  I can see why the studio thought he had potential as a leading man.  He’s capable enough and does his job in this movie, but if you want a better dose of him, you should check out Paths of Glory.

Jane Bryan, who played Davis’ kid sister in Marked Woman, shows up here as Robinson’s kid sister, Marie.  She plays young and naïve, and we believe she’s the country brat who falls in love with the farmboy boxer.  The more I see of Bryan, the more impressed I am as she elevates any movie she’s in – and I have to admit that I’m starting to develop a little thing for her . . .

Ben Welden, who was so good as the menacing enforcer, Charlie, in Marked Woman, appears here as Morgan’s right hand man, Buzz Barett.  Notice that with only the addition of an ear-to-ear grin, his presence goes from menacing in Marked Woman to incredibly smarmy in Kid Galahad.  This guy is so much fun to watch in the background of any scene he’s in.

There was not a lot to pick from, but there is one neat shot towards the end of the movie after the climactic boxing match.  Bogart’s “Turkey” Morgan needs to lure the cops away from Robinson and Morris.  We get a wonderful shot of him lurking behind a chain link fence, cigarette dangling from his mouth – and then moments later, a great silhouette of Bogie with his gun drawn. 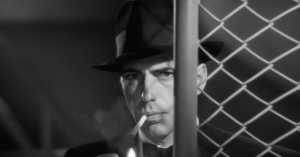 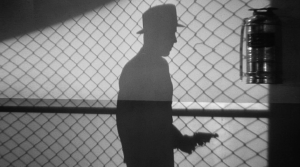 The movie is enjoyable enough that it should be on any Bogart fan’s list, but I’d advise you to double bill it with a 3+ Bogie Film Fix to make sure that you’re not jonesing for more Bogie later!  How about Petrified Forest?  Then you can spend countless nights pining away for Bette Davis just like I do now.  On second thought, that much young and gorgeous Bette Davis might be too powerful for any mortal man to handle . . . be careful!

Wayne Morris’ life and career were cut short after a heart attack when he was forty-five.  Even at that young age, he still had a good, long list of credits.  Make sure you check him out in Kirk Douglas’ Paths of Glory where he gets a better role to shine with!