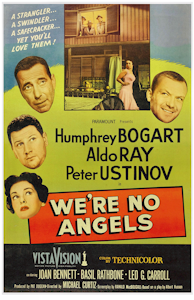 This is the best hobby I’ve ever had.

Part of the reason that I started this journey of blogging through every Bogart movie was so that I’d finally catch up on some of the classics that I’d never seen.  We’re No Angels definitely falls into that category.  Why, oh why, did I wait so long?

Joseph (Humphrey Bogart), Albert (Aldo Ray), and Jules (Peter Ustinov) are three escaped convicts from Devil’s Island who are looking for a boat to get them back to France.

(So now, within the span of just ten randomly picked Bogart movies, he’s played a District Attorney twice and an escaped prisoner from Devil’s Island twice.  I knew Bogart had his fair share of gangster and detective roles, but there were apparently other, very specific, character types that he gravitated towards.)

Joseph, Albert, and Jules need money to get the clothes and the papers that they’ll need to get on a boat.  Naturally, being thieves and murderers, they decide to steal them.

Joan Bennett and Leo G. Carroll play Amelie and Felix Ducotel, local shop managers who unwittingly hire the three men to fix their leaky roof.  It’s not long though, before the three convicts become quite useful to the couple around the shop.  Joseph, the conman, can sell merchandise that’s been on the shelves for years.  Albert can tend to the Ducotel’s eighteen year old daughter, Isabelle, who’s facing a crisis of the heart.  And Jules?  Well, Jules pops in from time to time as the group’s moral conscience – keeping Albert’s lustful urges at bay while steering Joseph towards helping the Ducotel’s rather than robbing them blind.

Just as the convicts begin to grow too fond of the store managers to rob them, an even larger problem arises.  The store’s owner, Cousin Andre (Basil Rathbone), appears on the doorstep with Isabelle’s love interest, Paul (John Baer).   The curmudgeonly and nitpicky Andre wants to do a full store audit and get rid of the Ducotels.  Paul has news for Isabelle that he’s marrying another woman and Isabelle is no longer the love of his life.

What follows is a pretty funny series of events where the three convicts do what they can to help the Ducotels – instinctively trying to solve every problem with the skills they know best – murder and thievery.

If you’re a fan of dry and subtle humor, We’re No Angels will be a bonanza of great fun for you.  Bogart, Ustinov, and Ray are all so talented at underplaying a joke that this film can often times near the line of “dark comedy,” although I don’t think it ever steps over.

Cast, cast, cast.  You know a cast is great when you begin looking up the actors on IMDB before the film is even over, just so you can find other movies they’ve been in.

I admit that I know very little about Peter Ustinov and even less about Aldo Ray.  Both actors fight Bogart tooth and nail in every moment they’re together, as they each take turns stealing scenes.  The chemistry is near perfect – and I’d especially direct you towards two scenes in particular:

1.  The three convicts washing dishes.  Bogart blindly tossing dishes to Ustinov is goofy and wonderful.  All three play the scene with a Three Stooges-like detachment which adds to the magic that’s happening right in front of them.

2.  A slow-build scene towards the end of the movie when the three men try to decide who will tell Cousin Andre that there’s a poisonous snake in his room.  The way they play down their delight as they toy with one another, carefully drawing out the conversation while pretending to be concerned, is by far the top gag of the film.  If you don’t enjoy it for the comedic genius that it is, both by the actors and script, then there’s something wrong with you.

And of course there’s Basil Rathbone.  The man can exude loathing in such a way that it fills a room like fog.  I need to go back and rewatch some of his Sherlock Holmes work.  The man commands the screen.

Based on a French play by Albert Husson, and adapted for the screen by Ranald MacDougall, most of the film takes place within, or near, the confines of the Ducotel’s shop.  Unlike a lot of movies based on plays, the limited location doesn’t ever feel confined or claustrophobic.  I never found myself saying, “Why don’t they ever leave?  How come we don’t get to see Bogart get the turkey?  How come we don’t see the prison escape?”  While all of those moments might have been fun to see, director Michael Curtiz does a wonderful job of keeping what’s happening in the shop interesting enough that the viewer doesn’t want to leave.

Perhaps my favorite moment from all ten films so far – Bogart and Ustinov are in the kitchen preparing the Christmas dinner and Gloria Talbott enters, complimenting Bogart on the pink apron that he’s donned for his work.  She tells him that it really brings out his eyes.  The moment she exits, Bogart grabs an absurdly large knife and turns to Ustinov, pointing it at him:

Bogart: (WITH MENACE IN HIS EYES) Say something.  Go ahead, say anything at all . . .

Ustinov:  (PLAYFULLY HONEST)  Joseph, it’s true.  It does bring out the color in your beautiful brown eyes. . .

Bogart could have gone dramatically over the top with the threat.  Ustinov could have played melodramatically silly with the line.  Both men though, nail it.  Great. Comic. Timing.  Who could mix menace and comedy in the same scene as well as Bogart?  (Maybe Peter Lorre . . . maybe.)

This had to be a film that Bogart was proud of.  It is the best display of his comedic skills that I’ve seen so far, and the film holds up very well, nearly sixty years later.   So glad I popped this in last night!

Not a fact so much as a fun discovery.  Joan Bennett was Elizabeth Collins Stoddard on Dark Shadows!  Is it bad that it took me half the movie to figure out why I knew her?  Is it even worse that I recognized her from Shadows before I remembered Father of the Bride?  The answer to both questions is “yes.”