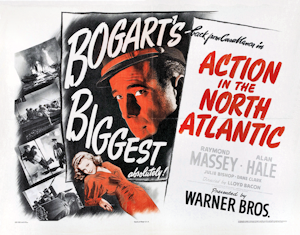 Director:  Lloyd Bacon (Byron Haskin finished the film after Bacon was dismissed when the studio could not renegotiate a new contract.)

Bogart is Lt. Joe Rossi, second in command on a Merchant Marine tanker that is sunk by a German U-boat during World War II.  After a harrowing escape in which the Germans ram the sailors’ lifeboat, Rossi and his crew are rescued and taken back to the U.S.

Safely back at home, it doesn’t take long for Rossi to find himself a new love interest when he meets nightclub singer Pearl O’Neill, played by Julie Bishop.  Against his hard drinking and woman-in-every-port image, Rossi and O’Neill get hitched.  You see, Rossi’s aging, and being a Merchant Marine is becoming a young man’s game, so he’s aware that his days for sewing wild oats and tempting death are drawing to a close.

Unfortunately for Rossi’s new bride, Rossi’s Captain, played wonderfully by Raymond Massey, is knocking on the door with a new mission – take a shipment of tanks, planes, and supplies to Russia with a fleet of other ships through U-Boat infested waters.

Rossi accepts the mission, as does the rest of his surviving crew, and before you know it, their new ship, The Sea Witch, is knee deep in U-boats and fighting for its life.

In an attempt to divert one of the U-boats away from the rest of the fleet, Jarvis and Rossi break away from the pack and begin a game of cat and mouse with the sub – including several nail biting scenes of silence as The Sea Witch attempts to “go dark” in silence to evade its pursuer.  After the sub calls in a Luftwaffe attack, Capt. Jarvis is injured, and suddenly Rossi finds himself in charge of a ship for the first time – a job he could have had a long time ago, but he never wanted the responsibility.

Although it could easily be considered a WWII propaganda film, Action in the North Atlantic  does a fine job of transcending the clichéd patriotism that we might expect from a film like this, and gives us a lot more character depth and nuance than most propaganda films can muster.

Bacon makes some bold choices in direction – especially in regards to some longer scenes on the German U-boat where the viewer can go several minutes with only German being spoken.  There is clearly a lot of trust on the part of the director that we’ll be able to understand the gist of the scenes even though no English is used, and it works well.  The scenes effectively elevate the tension as the viewer begins to understand a little German shorthand for what’s going on with the Nazi sailors.

Attributing all the directorial choices to Bacon may not be a safe bet though, as apparently producers pulled him from the last ¼ of shooting due to his expired studio contract and failed renegotiations, replacing him with Byron Haskins.

There are multiple stand-out performances from the cast here.

Bogart really shows his subtle side as the aging sailor who’s aware that his best days are almost behind him.  When Capt. Jarvis keeps complaining about the young, untested sailors that the ship is assigned, Bogart reminds him that times are changing and they need to change with them.  The movie is series of constant challenges for Bogart’s character to move on, step forward, and begin to think about the next phase of his life.

Dane Clark as Johnnie Pulaski does a great job of playing the conflicted sailor who has to weigh his priorities between his country and his family.  In a scene at the Merchant Marine’s recruiting center, we see Bogart’s crew tread a fine line between comedy and melodrama as Pulaski’s crewmates verbally rough him up, questioning his patriotism as they play a round of cards.  Bacon does a great job of putting the moviegoer in Pulaski’s mindset as we understand both sides of his dilemma – does he do his patriotic duty, or live to see another day with his wife and kids?

A young(er) Ruth Gordon, as Capt. Jarvis’ wife Sarah Jarvis, doesn’t get a lot of screen time, but what she gets makes me want to dig up more of her older movies.  The role of the forlorned sailor’s wife might all too easily have fallen into the realm of  formula for such a film, but Gordon makes a lot out of what could have been a throwaway role.

Here we go again!  Bogart enters a nightclub, a beautiful woman is singing, and we watch his mind begin to work as he sits on a bar stool with a drink.  Not a word is spoken, but we know . . . he’s captivated, so we’re captivated.

But my favorite Bogart moment comes when another nightclub patron begins talking too loud and too long about recent US ship movements.  Bogart, following the old adage that loose lips sink ships, diplomatically tries to get him to stop.  When the blowhard doesn’t take the hint, Bogie uses a quick uppercut to put him out of commission without drawing too much notice from the rest of the club.  Then we get the following exchange:

Bogart:  (TO THE BARTENDER)  Hey Charlie, I think our friend has had a little bit too much to drink, don’t you?

This is a strong, audience friendly, Rah!  Rah!  America!  film that doesn’t tip too heavily into the propaganda bucket for its emotional effect.  Bogart has a chance to play his character with an understated subtly that isn’t always common for this style of film.

The Russian pilot at the end of the movie is revving his engine in Morse code to say “V” for victory.